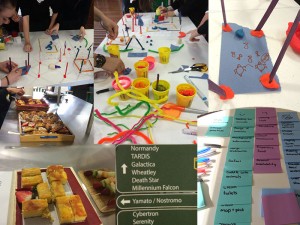 What’s it really like to work in IT? This is one of the questions we hope to answer in the Stage 5 elective course, Information and Software Technology (IST). One of the best ways to find out is to actually do site visits. Last year, we went to Google and Microsoft. This year, it’s Atlassian, one of the most successful Australian software start-ups which is now an international company.

Atlassian head office is in the heritage-listed Westpac building near Wynyard. The stark juxtaposition of the old and new is evident as soon as the lift doors opened. Enjoying free jellybeans washed down with free drinks, year 9 and 10 IST students listened to two Atlassians talk about what it’s like to work in IT, primarily as software engineers or coders as they prefer to call themselves, but also other roles such as UI designers and project managers. These women were inspirational as they spoke passionately about bursting stereotypes from a young age through to high school, university and then now, at work. They highlighted how software programming was a portable skill that could be applied in many industries as well as countries, paving the way for international travel and work opportunities.

After a quick Q&A, the coders left and were replaced by designers who ran a zoo-design activity that simulated the Agile Design approach they use at work. The girls were split into 2 Designer groups and 1 Customers group. Working with playdough, construction paper, markers, pipe cleaners and strings, the Designers set about creating their zoos, in 5 minutes. The Customers drew up a huge list of requirements which the designers attempted to meet. Customers also get to vote for the best design. After 2 iterations with more complex requirements and designs, the girls had a real sense of what Agile Design was as well as what the roles they also study about in IST entailed: Designers, Architects, (software) Construction workers and customers.

Finally, we were treated to a tour of two of several Atlassian floors. Teams corresponding to product suites sat together in one huge open space. The walls were used as meeting and writing spaces and anyone could add feedback long after the meeting had finished – a great idea that is sure to make its way into my classroom. There were also plenty of smaller meeting rooms with geeky names like TARDIS, Serenity and Death Star. There were plenty of breakout spaces including a pool room and dining room with the biggest bean bag and an area for playing board and video games. The video conferencing units were a literal nod to Portal much to the delight of one student who was a Portal fan.

The site tour showed a balance of work and play as well as a love of technology.  The values of being an open company and teamwork came across really strongly.  The tour concluded at the kitchen area where IST students helped themselves to a vast array of free food and drinks, including ice cream.

A few asked about work placements. Several felt the excursion was too short. Most saw the connections to concepts and skills learned in the elective, including UI design and programming in Python and JavaScript. All came away with a better idea of what it’s really like to work in IT.

If you’ve been following this blog for a while, you probably know that I used to work in IT. I’ve only worked in banking, finance and manufacturing industries, however; nowhere near the cool factor of Atlassian. That said, I did enjoy some of the perks mentioned, i.e. good pay, exciting problem-solving work, variety of roles, international travel, flexibility in work arrangements and portability of skills – stuff I could still draw upon now as an IT teacher.