Seriously, the themes from day 1 carried on.  My main takeaway from Dean Groom  is the importance of imagination and giving opportunities to not only let this surface/play but to used to meet a need to find a solution.  Actually, he mentioned this equation: tools + imagination + need = solution. I also appreciated him echoing Greg Alchin’s message of leveraging technology affordances to address accessibility.

Dr Bron Stuckey inspired us to pick up our hero journey as we learn more about PLANE and becoming better teachers for ourselves, our students, our peers.  While I’m not personally sold on the hero thing (I’ve got issues carried over from my IT days), I’m definitely sold on the idea of a learning journey being a narrative as a good hero journey should be and definitely on the idea that fun/enjoyment should be part of it.

If really pushed to do pick just one thing I can act on from the plethora of ideas gained from the conference, it’d have to be this: promote well- being of students and staff alike, thanks to Dan Haesler.   I previously blogged about what makes people tick which does help promote well-being. Dan spoke at length of Seligman’s PERMA model: Positive emotions, (active) Engagement (vs conformity), Relationships, Meaning, Accomplishment.  So many ways or angles to act on promoting well-being.  And if  still lacking inspiration, find some in Dan’s crowd-sourced wallwisher here.

I found Mark Treadwell really affirmed many of my thoughts on teaching, e.g. importance of concepts (vs topics), understanding the learning process, the beauty (my term) of inquiry. “Identify the concept, keep the body of knowledge small, apply knowledge to a number of contexts and practice.”  Apropos contexts, I love how Dan Meyer explains it.

It was really nice to be in Donelle Batty’s session, ably supported by students: Nick Patsianas and Nathaniel.  I am partial to their Massively Minecraft: Project Mist story (read more here).  Justly so.

Finally, I reckon Dr Jason Fox‘s approach for his wrap-up keynote was novel.  He showed us his notes – doodles for each session he attended – pity no one doodled his session yesterday! Anyway, just imagine if we didn’t force students to copy as we write it but let them freely doodle their notes.  As a Maths teacher, I have experimented with letting kids make their own definitions/explanations such as SMS or tweet but doodles trumps that, imho.

It was also good to see the PLANE team relax and dance gangnam style – thanks to Rolfe Kolbe, you can watch it too.  Rolfe tried to explain to me as he was doing this but I got lost as he flicked through a few apps. This guy’s an ace.

Well done PLANE team and presenters. The Festival of Learning really got this message across:

Repeating my PS: if you’re an educator, register at PLANE.

… programming is not really the practice of writing lines of code. It is the art of taking big, intractable problems and breaking them down into ever smaller ones which can be understood, explained and then carefully assembled into a living, breathing work of art.

Software is poetry. It’s the expression of ideas in the most elegant form a programmer can devise.

This is a quote from a piece entitled, Coding. Way funner than you think by @gilfer. It’s a wonderful piece that really gets inside a programmer’s head – the feeling, the buzz, the excitement, the creative process that is software programming. There’s many more I can quote here but hey, go over and read it because @gilfer’s prose is beautifully written.

My chosen quote, however, does capture the essence of my NCSS Challenge experience.  @grubbypandas pinged me about this challenge knowing that I wanted to learn Python as a potential language to teach for Computing Studies (IST and SDD).  Aside, @grubbypandas also told me about pastebin, really useful site, imho (THANK YOU). In other words, I joined the NCSS Challenge to learn Python AND get ideas on how to teach Python, or other programming language – all for $20….bargain!. I haven’t written programs for ages (and I mean ages) so I had my reservations but going into the challenge with  @grubbypandas and @akwc  helped.

I’m proud to say that I finished the challenge – Intermediate level –  and before I forget everything, thought it wise to jot down these thoughts.

Learn in manageable chunks. Each week, a set of notes were provided that  provided enough information to complete the week’s 6 questions. I skimmed through these and then referred back as needed. Over the weeks, I referred back to more and more – a good indication that I was building on previous knowledge and skills. All these resources are now available to me. yay!

Tackle interesting problems. Just like the quote says above, programming is at its core a problem-solving exercise. It involves looking for patterns (algorithms) and exceptions and then writing/tweaking. Still with the initial nod to the traditional “Hello world” , the challenge then took advantage of opportunities for tangential learning with questions involving Kaprekar’s constant, Aboriginal languages, QWERTZ keyboard (Y and Z swapped in German keyboards), iambic pentameter en route to writing Twitter poetry. I was learning more than Python.

Provide instant feedback and hidden cases. The interactive checker is rigorous and unforgiving chucking out an error for that printed extra space, for example – which is a good lesson in terms of real-world programming; pay attention to the requirements and realise that the computer will only do what you tell it to do. But wait, there’s more. The checker also includes hidden test cases which is a good way to ‘catch’ hard-coding of solutions (I’m not quite sure how else to explain that) as well as promoting extrapolation (higher-order thinking). And those green checks look better than the red crosses.

Have multiple-entry levels and promote community. It was very humbling to note that the challenge was meant for students, some as young as in year 5 (10 or 11 years old?) and that they were tackling the same problems as I was. Truth be told, I struggled more with unpacking the problems (finding algorithms) than in actual coding. The challenge provided a forum for students to help/engage with each other as well as contact tutors for more support.  The forums also showed that there are very capable students out there, already thinking about elegance and efficiency in writing and executing code; these skills rarely have outlets in traditional schooling.

There is more than one solution. As @gilfer noted in his piece, there is no single solution and that every programmer will express his/her style. The checker accepted working code but the challenge also published solutions which provided more opportunities to learn such as new commands/syntax not yet covered. I liked that I could play with different algorithms.

There was no forum for teachers. Okay, so there are benefits for going in there as a level-playing field (think massivelyminecraft approach). Still, it would be nice to discuss how this challenge can be incorporated into the curriculum or as an enrichment/extension activity. This is partially why I’m writing this post, in the hope that other teachers could extend my thinking here!

…not much else to dislike…seriously. (Update a few minutes later: @grubbypandas has kindly pointed out what I missed… THERE IS A FORUM FOR TEACHERS…and I missed it….gah!)

All up, it was a fantastic 5-week challenge. Sure it got frustrating in parts but ultimately rewarding. I highly recommend doing the challenge with students, not just for Computing Studies, in fact. It’s for anyone who wants to encourage computational or algorithmic thinking. As this challenge has shown, this type of thinking can be promoted as cross-curricular; there are patterns everywhere (I’ve said that in my Algebra classes as well); Python is a tool to help code those patterns.

Coding. Way funner than you think.

Bron Stuckey talked about MM as a research into learning in the 3rd space, learning outside of school. It is a space where kids are leading kids and learn about digital citizenship by being digital citizens. Adults are there (@jokay*, @vormamim, @bronst) to guide but not to dictate. There is no curriculum but there are badges kids can aim to earn so they can level up, if they want to.

I won’t go into the details about MM here as if you’re interested, you’re really better off visiting the MM site.

What really struck me was what Bron called the small g and the big G. The small g is what kids learn in-game, e.g. building houses, fighting creepers, crafting potions. The big G is what kids learn through the game using MM as a framework, e.g. writing journals, making video tutorials, skyping (text and voice), screencasting, self-directed quests. The big G provides opportunities (heaps) to develop individuals and a community where kids lead kids and kids are comfortable to learn and I know that from Megan’s experience, that the learning is massive! ISTE’s NETS for students are met in MM.

Bron briefly talked about Quest Atlantis. She said that educators can find the jump to no curriculum (MM) too big a leap which is why QA can be appealing. In QA, kids complete educational tasks through quests and missions.

Dean reckons all these is transferrable into other contexts – different virtual worlds (Second Life, OpenSim, etc) and books/texts (Lord of the Flies, Animal Farm, etc).  Set up the big G and kids will learn. I can begin to see that it is possible, thanks to the l33tMeet. I can begin to appreciate that teachers are (can be? should be?), not so much teachers but, designers for learning.

Between you and me, I much prefer to use the terms small g and big G as against gamification and GBL.

*Jo didn’t “speak” today. She was busy doing what she does extremely well, “playing” with the kids in-world.

**I’m guilty of thinking how can I tick all the boxes in the curriculum with nary a thought that maybe the boxes are not enough; kids can do more. 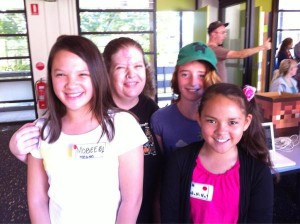 Today I joined Massively Minecraft, “a learning community exploring how to live, work and play in Minecraft“.  I’ve posted before how this world is where my younger daughter, Megan has developed her ‘voice’ (see Of Hopes and Dreams).

I watched her play – and learn so much – in the last 3 months; a source of vicarious learning for me.  Megan has developed in so many ways but this post is not about her.  This post is about me in Ms10’s world.  Here she is, watching over me with one of her epic builds as a background. 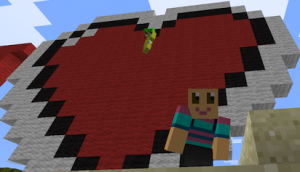 Megan in yellow, hovering over me.

In this world, Megan is literally watching over me.

So, this is play?
It’s hard and there is much to learn but the fun is not just a promise for when I’m good enough.  The fun has already started.  It’s not just me having fun either.  Megan is truly delighted, just as she is delightful.
So when people say learning should be fun, it’s not to dismiss the idea of difficulty.  Nor is play something you do before you do real work.
Play is work.
Play can be difficult.
Play is fun.
Play can be intentional.
Play is not just the start nor just the end.
Play is.
…. and I’m learning with and from kids.
…. because I can!