After a term break from PBL, I’ve gone back to it with both my 9 and 10 IST classes. I’ve been meaning to share the ‘idea’ but just haven’t got there (Is it really week 4 now?). Anyway, I’m glad I’m doing PBL again now as well as incorporating some of the things I’m learning as I do my Masters in Special Ed.

So then, in this post I’ll share my 10IST PBL plus a (rough) lesson plan that targets content (IST: problem definition, GUI design) as well as an example of teaching approach that promotes active response (one of the effective teaching principles I’ve learned about recently). 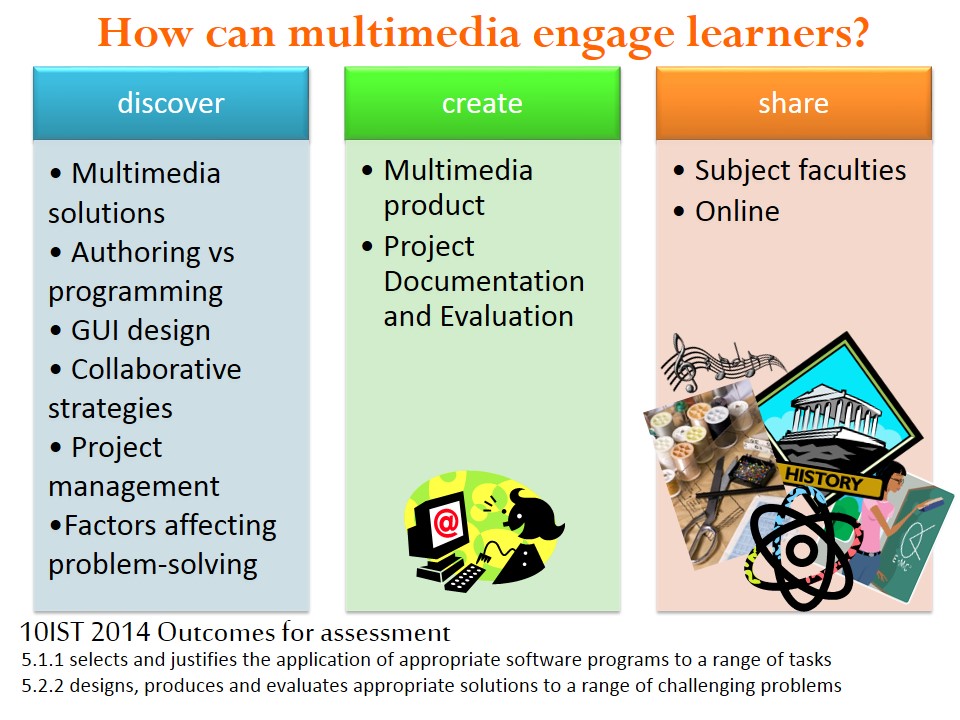 We’re about a third of the way in and most of the theory have been covered (via direct instruction) by  now. However, I’ve noticed that while students ‘get’ the idea of what engagement looks like or what ‘good’ GUI looks like, I wasn’t convinced that they’ve wrestled with it enough to apply in their own projects.

So I designed this lesson to show how a topic could be presented online in three different ways. The topic is a probability problem popularly known as the marriage or secretary problem.

I divided the class into discussion pairs.

First, I showed the wikipedia version which provided a  brief description of the problem. Discussion was first done in pairs and then as a class. This is the first time the class have heard of the problem so there was a lot of “I don’t get it” and a few, “yeah, I’ve encountered that problem heaps of times”.

Then, I showed this academic article version which provided, as expected, a more academic description of the problem and solutions. There were ‘whoas’ as we scrolled through the voluminous and dense text blocks and equations. Again, discussion pairs followed by class discussions. We got to unpack some of the GUI principles to do with form, function, navigation, layout, etc. just by comparing this with the wikipedia version. They were applying the content previously learned, both in terms of concept and language. Their analysis of GUI design is becoming more sophisticated and this is awesome.

Finally, I showed this NPR article with a sensationalist and attention-grabbing title of How to marry the right girl: a mathematical solution (thank you @fawnpnguyen for the inspiration!). We went straight into class discussions on this one and highlighted which GUI principles made this one more engaging, including the use of graphics and share/comment buttons – a feature they may well include in their projects.

There was also a bit more discussions when one of the students piped in that she thought the wikipedia version was more engaging with its neutral tone and predictable structure. This emphasised one of the key things in the design process, i.e. problem definition and how wikipedia addresses a different problem (and audience) than the other two. ‘Engaging‘ then, is relative (gotta love those lightbulb moments). Therefore, as they set off creating their own solutions (project product), they need to be mindful of the problem they are actually trying to solve.

Then, I asked them to create their own version of the topic in what they think is engaging. Students challenged themselves to learn more HTML and CSS tags and JS scripting, based on what they want to learn and incorporate in their own projects.

Sometimes lessons work according to plan, if not better. This was one of those. It can be better but I sure was pretty happy with it.

The student who preferred the wikipedia version went on to do more research on the marriage problem because she really wanted to understand it (she was in the minority, I assure you, but enough to make this ex-maths teacher a little bit happy). And in doing so, has illustrated yet again the beauty of tangential learning and the power of inquiry driven by curiosity.

2 thoughts on “Multimedia PBL and wrestling with the marriage problem”