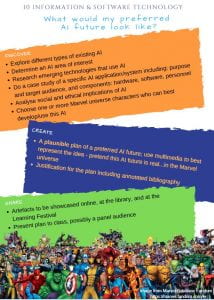 I’m not gonna lie. When DTHub asked if I could share my story about a recent PBL unit with IST, I squealed with excitement. Validation, right? Usually I just share here but DT Hub has a much bigger audience than my blog!

The story is up – What would my preferred AI look like?  There’s no point re-posting here so please go there to read the story, download resources including assessment task details, and  view exemplars – plus some tips on adjustments you can make to it.

I was excited planning this PBL and tweeted this poster on the left a lot. Running it got frustrating at times – as projects sometimes (often?) do. But the students engaged, and persevered, and rose above feelings of confusion and frustration. The result was a triumph in teaching and learning which I was glad and proud to share more widely.

The story in DT Hub is not complete though. There are more awesome stories to tell, e.g.

That last point is a salient one and the reason for the blog post title. There are so many negative stories around and it’s important to share positive ones. I really believe that everyone has awesome stories to share: face-to-face or online.

We all need to share more of the good stuff because this is the stuff that gives us – and our students – hope for a better future, and that education can help us get there. I think this quote I shared on my post about (action-research on) hope is appropriate to re-share:

…if openly shared and freely distributed, hope can spread throughout the community. –  James Arvanitakis

Someone gifted me this perspective a while ago as I battled with impostor syndrome (this nasty voice inside that refuse to just leave me alone for good). Putting this video  here again in case you need it to be convinced that you have something awesome to share. We all do.

I’ve long viewed this day as a cliché and the commercialisation of it irks me. Still, my family  celebrates it every year and it’s a lovely family day for us. Here’s the thing, as years pass…as I get older, I’m learning to cherish this day when motherhood is celebrated.

After all, what a privilege! I have 2 lovely daughters, 2 lovely human beings. I learn so much from them and they challenge me to be a better person. It’s a tough gig  but I wouldn’t have it any other way. 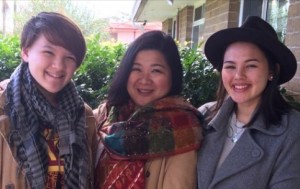 I’ve been lucky, too, to have a mother who I’m sure was born a generation too early! I’ve learned heaps from her directly and vicariously…and that includes the love of learning and reading and crafting and volunteering and giving and mother-ing and so on.

What’s more, my social media is full of well wishes to the many mothers I know. This has made me realise that not only do I have wonderful kids, I’m also surrounded by amazing women who have raised wonderful kids as well as many friends raised by wonderful women. Now, there’s a happy thought!

None of us will be here without a mother.

So cliché or not….

I cherish this day then, not just for the wonder and privilege of being a mother but for all the mothers, including my own, as well as would’ve been, would-be, can’t be and don’t-wanna-be mothers.

More and more, I view mother’s day as a celebration of women.

Is there a ‘happy women day’? Maybe there should be.

Is it possible to teach resilience? I guess it depends on what we think ‘teach’ means, i.e. direct instruction vs facilitation vs guidance, etc. Whatever. I think there is more consensus that resilience can be learnt….somehow.

As a mum, I think resilience is one of the most important things my daughters ought to learn. I have a professional and personal imperative to know how to teach resilience. Previous advice and research have taught me to expose my kids/students to challenges/difficulty and failure; easier said than done, at home and at school. Still, it seems to work (at home, at least) and my daughters are fairly resilient (lucky me!) BUT not so much when it comes to school stuff.  We’ve had plenty of dramas on this over the years (“I’m stupid; I’m dumb; I’m no good at Maths…).

Whatever happens at school, at the end of the day, us parents have to help our kids deal with it. Likewise as teachers, we can perhaps help our students learn resilience.

@anniemurphypaul wrote Tough as a drill sergeant (apropos, it’s worth subscribing to her posts….do it) with strategies that make sense and are easy enough to remember.

Optimists see setbacks as “temporary, local and changeable”.  This phrase appeals to me far more than related clichés: Think positive, Don’t sweat the small stuff, This too shall pass and I dare say: Keep calm and carry on.

Negative and disparaging thoughts will come so it’s important to know that one can and should fight back. Block them. Challenge their validity. Search for a different/positive perspective.

Be grateful and generous.

Find the good and be thankful.

I’m not so sure this would work but I’m willing to give this a go. With my kids. With my students.  I love that the strategies are action-oriented, concrete vs. abstract.

I wonder, is resilience context-specific and how can it be made transferrable?

This is a re-blog of an email from Bruce Oppenheim (@brucew_o), a Science teacher at my school. To promote interest in Biology and extend beyond the content of the curriculum, Bruce sends out a weekly email to opt-in “subsribers”. This is the most recent: 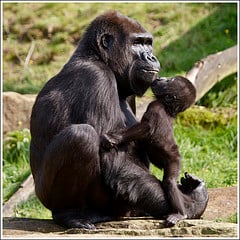 A story of Beauty, Cinderella and the ugly species

Snow leopards are to die for.

We all love polar bears.

Look at their babies with their cutesy little faces looking out of the pictures at us.

It would be an INJUSTICE TO SEE THEM DIE!!!!

The world would be less rich, interesting, whole without them. 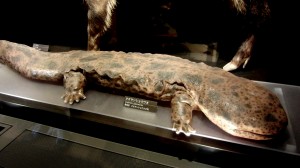 But what about the giant salamander? the slimy worm like amphibian Sagalla caecilian? The mexican burrowing toad?

I haven’t even gotten onto plants…. 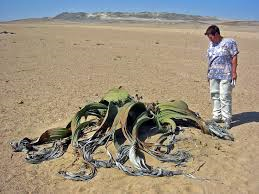 Recent studies suggest that conservation organisations focus almost entirely on just 80 species of mammals to raise funds and awareness to protect our world from species extinctions.

But 61% of their campaigns raise fund only to save those particular species – ignoring the 1000+ other species of mammal also on the brink.  Let alone the 16,000 known non-mammal species following the Dodo.

These are the flagship species, the lucky ones, 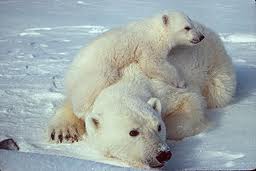 Analysis shows that these are 80 species are generally cuddlier than the rest – larger (like us), have forward facing eyes (like us) and furry (like our cuddly toys).They are also mainly primates or carnivores.

‘cos the public can relate to them, buy postcards of them, feel sorry for them, give money to save them.

And in many cases it’s a case of aesthetics over need.  There are levels of endangeredness from “critically endangered” at one end (the end nearest death) to “vulnerable” and many of the flagships are at the vulnerable end, while many critically endangered are ignored by the world’s media, public and funds. Just the wrong end of the extinction fashion parade.

But is this the best way to save our cousins on the tree of life?

So here  are a couple of suggestions people have been coming up with recently. 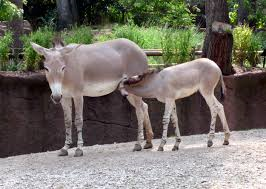 “Which ones here are forgotten but still adorable in the right fashion shoot?

Maybe these too could get to the funding ball”

They are recommending upping the Flagship list, not purely based on looks, but risk too. Bringing some critically endangered species to meet the Prince Charming’s of international attention, sponsorship and conservation funds.

Front runners include:  The African Wild Ass and the Pygmy Racoon

2)      Let’s be different, let’s allocate funds based on number of species helped.  Let’s look at possible conservation areas where there are many endangered speces (including the ugly ones) and put our conservation funds into protecting as many species as possible – if forest X contains 50 endangered species, whereas forest Y contains 5, maybe forest X should be the focus of conservation efforts.  This approach is being developed by scientists at New Zealand’s department of conservation. Some don’t like this as it does seem like choosing to sacrifice some species for the sake of others but the tragic fact is that present conservation funds are 1/10th of what is estimated we would need to spend to save all presently endangered species.

Extinction rates are high right now (over the last 2-300 years)  – 100 to a 1000 times higher than they have been since the last major extinction event when the dinosaurs went pop. Lets hope that we all start to look out for the ugly critters and flora and not make humans the earths next asteroid impact!

This may sound like a lot until you realise how much people around the world spend on everything else.

Disclaimer:  I made myself sad researching this “fun” fact.  If it made you think about helping global conservation then it will make me happy again 🙂

I’ve been asking Bruce to set up his own blog and write posts instead of emails. His work deserves wider readership than the limited distribution list.

My year 10s had just had their storyboards assessed and approved.

They were supposed to get started with planning for the next  stage of their multimedia projects; maybe even get started developing components of it.

My year 10s were visibly unsettled today at period 1. They said they had an English assessment next period – speech. They exchanged stories of how late they went to bed to get this ready and the ‘winner’ (not in my class) went to bed at 4:30 a.m. How anyone could function with such little sleep is beyond me!

We ploughed through the work that needed to be done but they were easily distracted and not really focusing.

In the end, I succumbed and gave them the last half hour of the lesson to practice for their speeches. They had to pretend it’s the real thing so they had to perform in front of everyone as against doing it quietly in their own ‘corner’.  I figured, they weren’t really being productive in my subject so they might as well be productive in something.

Here’s a gist of what happened:

Part of me feels like I’ve been sucked in. Yet, was it really a waste of time?