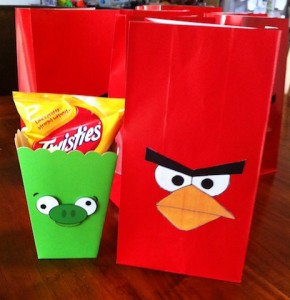 I had Ms10s Angry Birds birthday party yesterday.  One of our activities was “Who’s more clever – Birds or Pigs?”.  There were 3 logic/maths questions – in QR code form -and Q1 must be answered correctly before going on to Q2 and eventually Q3.  I needed to divide the 10 girls into 2 teams and initially planned to do this by drawing strips from a bag (strips with either pig or bird on it). With all the party preparation, I didn’t get ’round to making these so had to quickly think on my feet. I hit on genius.

I asked the girls, “How can we divide you into 2 groups?”

There were lots of suggestions including birthday month which eventually won.  Interestingly, there was a girl who pleaded not to be grouped according to size.  After they were split into two groups of 5, the next question was who will be the the pigs and who the birds?  Consensus could not be easily had, even within the groups.  In the end, a girl suggested a vote such that whichever gets the most vote for pig or bird wins it.  Brilliant!  A vote was done and so emerged assignment of bird and pig teams.

Throughout, the girls negotiated amongst themselves and figured out their own solutions.  They decided that the fastest writer was the best thing to do.  They also decided to take turns being the reader.  They decided that they needed each other to answer the questions.  The objective was to get through the 3 challenges in the quickest time in order to win.  It was amazing to watch.

I like planning and organising parties and sometimes I do over-plan.  This became obvious when Ms10, then 6, asked for some ‘free play’ time.  I’d like to think that I’ve somehow matured in this process, helped by my teaching experience.  I am so proud to have ‘let go’ of control and allowed the kids to take some ownership and to struggle with the problem themselves.  I piped in every now and then to ask the “essential questions” but for the most part, they did the job themselves.

I’ve been writing a series of PBL posts but this is PBL in action.  Can you recognise the elements I’ve been talking about in the past few posts?

Now, this may actually be GBL – Games-based learning as well but I don’t feel knowledgeable enough about it.

For the record, the pigs won.

2 thoughts on “PBL in action – Pigs vs Birds”